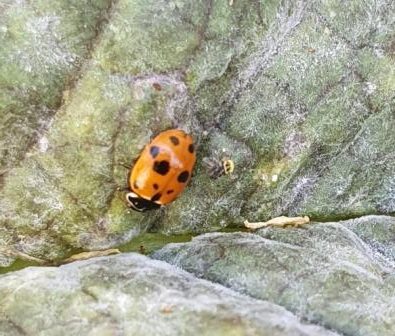 What’s that white powdery substance on my plants leaves?

It got me wondering “how many other gardeners consider powdery mildew a disease restricted to plants of the cucurbit family?”

Most gardeners will have struck powdery mildew on their cucurbits (i.e. cucumbers, cantaloupes, pumpkins etc). It shows up as a white or grey powder on the leaves. While it generally doesn’t kill your plant, it can significantly impact your crop as the plant can’t produce lots of fruit while its energy is being drained off and the plant is trying to fight the disease.

Powdery mildew actually affects a wide range of plants, not just zucchini, pumpkins and squash. It can affect both edible and ornamental plants. Edibles that can be affected include carrots, apples, grapes, tomatoes, eggplants, peas and beans and capsicum to name a few. Ornamentals can include chrysanthemums, gerberas, dahlias and roses. In fact it’s probably quicker to write a list of plants that aren’t affected!

So what is powdery mildew? Powdery mildew is a fungal infection. The fungal spores attach to the leaves of the plant where they drive filaments or threads into the leaf structure to draw the nutrients away from the plant. The fungi then develop fruiting spores which can be transmitted by wind or water splashes. The fungus thrives in warm, dry conditions and warm, humid conditions.

Powdery mildew is actually caused by a range of different fungi, some of which are specific to a species of plant while others can affect a whole host of plant species.

There are several things the organic gardener can do to prevent powdery mildew in their garden:

If you find that you continually battle with powdery mildew then you may need to investigate the range of crops that have been developed to be resistant to the fungus.

If you find that you have an attack of powdery mildew, there are several organic treatments. These include:

← Are Blueberry's Easy to Grow? 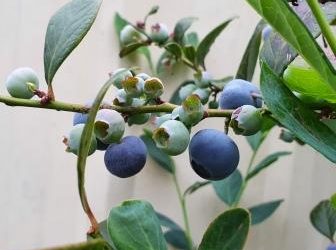 Are Blueberry’s Easy to Grow?

Blueberry Hill? I am thinking of renaming my place Blueberry Hill after the number of blueberry bushes that I now have producing fruit! The only problem being that I am at the bottom of the hill, not up the top? How it started? It all started with one little blueberry...

END_OF_DOCUMENT_TOKEN_TO_BE_REPLACED Talking about composting on BayFM This week I have been asked if I could talk a bit about composting on my BayFM radio program. We have mentioned compost a few times. However, it seems its one of those things that people are a bit hesitant about. I can understand this...

END_OF_DOCUMENT_TOKEN_TO_BE_REPLACED

Good Bugs in your garden #1

Following on from my interview at BayFM, I wanted to write a few posts on Good Bugs. So what do I mean by Good Bugs? Good bugs are those insects that prey upon bad bugs in your garden. Bad bugs include caterpillars, scale, aphids and mealybugs. There are plenty of...